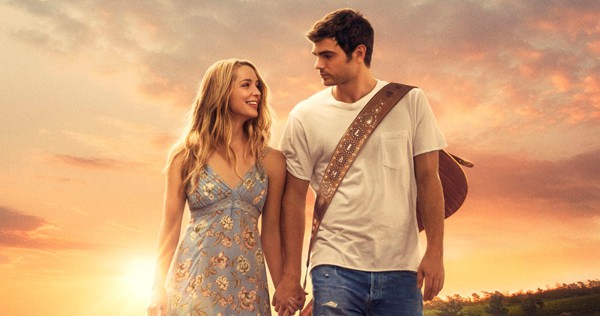 I got a chance to sit down with Alex Roe, born Michael Roe-Brown, a handsome English actor who has been in films such as 2000’s horror/thriller, ‘The Calling,’ the action/sci-fi film ‘The 5th Wave’ in 2016.  In 2017, he was in both the horror film ‘Rings’ and the drama ‘Hot Summer Nights,’ which also starred Timothée Chalamet.  Now this year comes the romance and his biggest part yet in ‘Forever My Girl,’ for which he not only played a country singer but did the actual singing on two songs in the film.  By the way, not only is he good with his accent, he sounds like an authentic country singer from the south when he belts out the tune, ‘Don’t Water Down My Whiskey.’

He’s just fantastic and has a big career ahead of him.  Born on June 18th, he shares a birthday with another famous Brit, Paul McCartney, he’s much younger, of course.  Born in 1990, he’ll be turning twenty-eight this June.  He was really nice to talk to and was charming and genuine.  Alex sings when he knows no one is around to hear him, yet gets himself in a movie where he’s a big country singing sensation.  He’s not a bit shy but has such a gentle personality that he comes across that way.  He definitely leaves an impression on those who meet him, as he does in the film.  I hope you enjoy the interview.

We start and as I turn on my H5 Zoom Recorder he looks at it with concern.

AR: It looks like it could survive a nuclear attack, this thing.

SKG: It probably could, actually.

He eyes me suspiciously.

AR: You know something I don’t, don’t you?  All of your equipment is nuclear proof.

SKG: I know I can count on it to get a good interview.

He puts his hand to his head.

AR: Radio to sound dude.  And…

Alex pauses a moment before saying, ‘Speeding!’  Which is what is said when sound is ready to go and start to record.  I said, ‘Exactly!’  Actually, I wanted to tell him I could use his talents on set as a sound engineer the next time I shoot a short film but decided to get on with why I was actually there as time was of the essence… nor would I dare say such a thing.  Anyway, I had to know about his singing.

SKG: Did you pick this role because you know you have a good voice and wanted to show off that talent?

AR: I picked this role because… uh… because I thought it would be a really interesting challenge.  To have a go at playing a country singer.

SKG: You were already prepared then?

AR: I had sung at home and stuff and I had sung, like, in the shower and like when people were out so, I knew I could carry a tune and if they were ready to take the risk on me, that I would be able to work hard enough to hopefully make something work. But, umm… yes, I definitely took it partly because of the challenge of that.

In case you missed that… he sings in the shower.  One can only imagine.  Okay, on to the film.

SKG: Forgiveness played a large role in the film, as well.

AR: I thought the story of forgiveness and family and home and all of that kind of stuff was… nice.  It was different than the stuff I’d been doing.

SKG: The strongest message in the film, I thought, was to forgive and move on with your life.  Do you find that an easy thing to do?

AR: I think everyone finds it really difficult to do but I think it’s really important.  I think you can really, kind of, be set free by forgiveness, you know?

I nod my head in agreement as I believe it, too.  It’s so obvious that holding onto regret and anger will eat you alive.  His character, Liam, has many regrets that even being a mega-rich country singer can’t wash away.  Alex recognizes this.

AR: There’s a real strength in it.  Even with, like, little moments where you could not forgive, and you do, there’s definitely this empowering feeling cuz you’ve made the decision to forgive so therefore you’re in control of it and I like that it’s part of this movie.

SKG: Why, in your opinion, does your character, Liam, leave?

AR: (Takes a deep breath) I… think…yeah, that’s tough.  I think, really deep down, I think that he hadn’t really dealt with the loss of his mum.  (He’s silent for a moment.)  And I think that as he kind of explains and kinda comes to terms with it, I think he was just running away.  Running away from the potential of feeling the pain that he had pushed aside with his mum and the potential of maybe, like, losing Josie and all of these things.  I think fame was this really, really easy, like, gratification for him… that he could run towards and feel good, like, temporarily; because all these people adore him and stuff like that so, it became, kind of, an easy fix for his problems but those easy fixes are, umm, not long lasting.  They’re easy for a reason.  So, when he comes home he, kind of, figures out how to actually deal with this stuff.  That’s coming home and reconnecting to his roots and stuff.

SKG: Is there at all a possible chance that he didn’t want to end up like his father, even with religion?  His father is a pastor so maybe even speaking to the religious aspect of the film, maybe he didn’t want to be.  And are YOU religious?

AR: I don’t like to talk too much about my beliefs and stuff, really, but I think that… I don’t think he was necessarily running away from the religion.  I think that it was more of a personal thing than a religious reason why he was leaving town.

SKG: You are building quite a resume of characters.  Is there a certain school of acting or method you like or prefer?  Meisner, Adler… Stanislavski?

AR: I kind of like to take little bits from all of those.  I’ve taken classes and intensive courses and stuff and that was my schooling really.  Taking little bits of everything.  And I think you, kind of… when you start working, you don’t necessarily draw on those techniques… you don’t really realize that you’re drawing upon those techniques that you learned but you are.  They’re ingrained there.  So, like, if it’s listening; like the Stella Adler listening and observing, then that’s something that you, that you just naturally do, hopefully.  Or, you notice that, ‘I’m not listening and observing right now and I need to.’  Cuz that’s what acting is; acting and reacting, ultimately.

SKG: So, nothing specifically?

AR: I don’t know, there’s not one specific school… I think I’m just going to keep learning and keep studying and… yeah… hopefully figure it out at some point.

I certainly don’t think he has much to figure out.  He’s a strong actor who commands the screen when he’s on it and with his parts growing ever larger, he’ll have this thing licked before he knows it.  Now, regarding the movie, and a child actress in it, I had to quote W.C. Fields to him who said, ‘Never work with animals or children.’

SKG: In ‘Forever My Girl’ you worked with this little doll of an actress who plays your daughter.  Her name is Abby Ryder Fortson.  W.C. Fields famously said, ‘Never work with animals or children.’  You didn’t listen and Abby completely stole the scene.

AR:  Every scene!  As she should.  Yeah, I’m glad that you know who it was that said that cuz people have quoted that to me, but I didn’t know that, that was the person who said it.  But yeah… don’t work with kids and don’t work with animals.  I think with children, there’s an attention span that’s a little bit less than adults, definitely understandably, but I couldn’t get more lucky than to work with Abby.  She’s so smart and so, like, brave and she takes direction really well but is also down to improvise which is really amazing.  Half the stuff that made it into the movie was just Abby and I messing around.

AR:  I got really lucky cuz she didn’t seem to have a nervous bone in her body, you know?  She was just having fun and enjoying it.  And it definitely makes you check yourself cuz enjoying it is so important.  Seeing a kid enjoy it that much… it kind of reminds you that, ‘Yeah!  You gotta enjoy this. It’s fun!

SKG:  At what age did you start?

AR: I did my first movie when I was ten, so I could relate to her as far as, that two-month shoot that I did felt like a lifetime, so I knew that for her this shoot, like, every little moment was gonna feel like a month of experience.  So, that was really cool for me to see someone experience something that I did.

SKG: You were into it really young.

AR: That was when I did my first movie.  I kind of took a little break from acting and I was playing soccer and, cuz that initial movie I just kind of fell into it… because they did an open audition at my school and I went up to the director and I said, ‘Look, I know that I haven’t done a lot,’ I was ten years old and I was like, ‘I know I haven’t done a lot but I’m good.  I promise.’  I was like really confident.

SKG:  You have to have that kind of confidence.

AR:  I think so.  Abby definitely has that in spades.

SKG: Yes she does.

Wanting some sort of scoop, I pushed my luck a little bit.  Okay, it moved away from the film, I guess, but you can definitely check out my review, for more information.

AR: (Thinks a moment) Something I haven’t told anyone else.  Oh!  This is… umm… wow.

AR: I’m so open, I tell everyone everything.

SKG: (I point at him) Now that’s not true!  You wouldn’t tell me if you were religious or not.

AR: I know. (Laughs; continues to think) What’s something that I haven’t told anyone?  Oh, I’m sorry.  I can’t think of anything quick enough.

AR: That’s a really great one.  Then, favorite song… I think ‘Jolene’ by Dolly Parton.

SKG: Jolene?  Dolly Parton?  Did you just say that?

SKG: Oh, of course.  I used to live in Tennessee.

Alex smiles.  Dolly Parton.  Wow.  I wouldn’t have seen that coming.  Anyway, check out ‘Forever My Girl’ this weekend for some romance.  I think you’ll agree that Alex Roe has a big future in the genre… or any genre he so chooses, for that matter.  Maybe he’ll record an album someday?  Oh!  I should have asked him that question!  Missed opportunity.