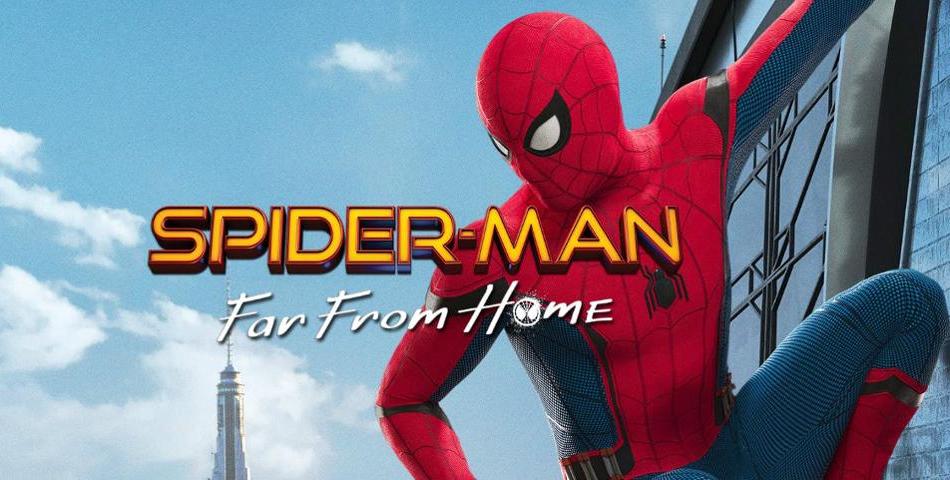 “Spider-Man: Far From Home” is a Marvel superhero movie that comes after the events of other recent Marvel blockbusters. The people and plot of this one has been affected by many things that happened during the prior movies. That includes the ‘Thanos Snap’, the restoring of everyone who had been affected by the Snap (called the ‘Blip’ here), and even the demise of Iron Man. Tony Stark had taken a very personal interest of Peter Parker, who is the teenager in the Spider-Man suit. But the bright and breezy atmosphere in this movie is in ‘Stark’ contrast to the heavy luggage that was carried during “Avengers: Infinity War” and “Avengers: Endgame”. Because it’s time to take a European Vacation (but not the National Lampoon variety) …

Peter Parker (Tom Holland) is back at his high school, also with his other friends who have been returned from ‘the Blip’. That includes his close pal Ned (Jacob Batalon) and Peter’s secret crush MJ (Zendaya). His science class is planning a trip to Europe to study there over the summer. The also restored team of Nick Fury (Samuel L. Jackson) and Maria Hill (Cobie Smulders) are dealing with the absence of many superheroes. Iron Man is gone, Thor is off-world, and Hulk is not even mentioned. But there is a new threat to the Earth, creatures called the ‘Elementals’. They get their power from the elements: Earth, Wind and Fire (but not the 1970’s soul group). However, a new ‘hero’ seems to have emerged to fight off these destructive beings. He goes by the name ‘Mysterio’.

Back in New York, Peter’s Aunt May (Marisa Tomei) and Happy Hogan (Jon Favreau) are getting along great. Happy was Tony Stark’s driver and security chief. But now he has more free time to spend with Aunt May. Peter was getting a little freaked out about that. But he gets even more freaked out when the class goes to Venice. They find that the Water Elemental is there and will try to destroy the city. But Mysterio gets there and he has the power to stop the monster. He gets some help from Peter, even without his Spider Suit. Nick Fury wants Spider-Man to play an active role to defeat the Elementals. That means Peter would need to end his vacation and work with Mysterio. Oh, by the way -his name is Quentin Beck (Jake Gyllenhaal), and he is from Earth. Just not this Earth, since he is come from an alternate universe version of Earth – where the Elementals gained power and killed his family.

Fury gives Peter one final gift from Tony Stark – his old sunglasses. That’s all nice and all, but so what? These are actually a special pair that Tony could use to control the Stark empire with embedded artificial intelligence. Tony designed the E.D.I.T.H. access system (! wait until you hear what that stands for !) for Peter to control everything that Tony used to. Nick Fury is sure that Peter is not up to the task, and he messes with the class trip be rerouting them to Prague instead of Paris. A Fire-based Elemental starts to attack Prague, and Mysterio teams up with Spider-Man to make sure it is defeated. Peter feels that he cannot handle the ‘great power’ of the E.D.I.T.H. sunglasses, because with great power comes… Well, you probably know the rest.

Peter gives the E.D.I.T.H. sunglasses, which are the Keys to the Stark Kingdom, over to Quentin Beck. Peter thinks Beck has a responsible nature and he would correctly use the power that could be unleashed. But then, there would be no remaining part of the movie. Just say that, Mysterio turns out be a little different than Peter Parker and Nick Fury thought he would be. So, there are more web-swinging adventures that will need to happen, this time with the London Tower Bridge as a backdrop. There are more battles to fight and win, and this time – the weight of the universe does not depend on the Avengers. Peter Parker gets a little bit of time to spend with his classmates, especially Ned and MJ. It turns out that Peter and Ned (who already knew about Peter’s secret identity) now have another ally in MJ. Because she is very observant and guessed correctly.

“Spider-Man: Far From Home” is fun relief from the recent Marvel movies, where interplanetary forces can destroy the whole world. But in “Far From Home, it is just a friendly, neighborhood Spider-Man, swinging into action – so to speak.  Actor Tom Holland is the prime cut of Spider-Man. Better than any prior version of Spidey, he gets the teenage angst and uncertainty with no problem at all. Also, Jake Gyllenhaal really steps it up to make Quentin Beck and Mysterio a viable Superhero (until he is not). Everyone else is spot on for the roles that they play (especially Jacob Batalon as Ned, Jacob Batalon as MJ, and Marisa Tomei as Aunt May).

Just an FYI: There are two extra scenes, and they are real shockers. Stay for the first one – where there is a brief cameo of an important Spider-Man related character. It proves there is a crossover from the Marvel Universe to the Sam Raimi Universe. Plus at the very end, there is a link back to another recent massive Marvel hit that will leave you gasping! Or just laughing- take your pick!

Based on “Spider-Man” (by Stan Lee, Steve Ditko)

@peepso_user_45175(JMcNaughton) Marvel has been a powerhouse for the past ten years. When they make movies like this - it is actually produced from Sony - they bring even more fun into the mix...