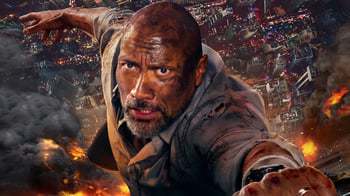 Somehow someone settled on the title ‘Skyscraper’ for this new action film starring Dwayne Johnson. After watching, I think a better title may have been ‘101 Ways to Best Use Duct Tape.’ At no time ever has an action film had its star running around trying to be the hero with almost nothing at his disposal except for this ‘strong, cloth-backed, waterproof, pressure sensitive, adhesive, miracle-working cure-all. But writer/director Rawson Marshall Thurber does and it sorta works believe it or not. Maybe an even better title would be ‘101 Uses for Duct Tape-Towering Inferno Dies Hard.’ I might sound as if I’m being a little harsh with the comparisons to earlier films, ‘The Towering Inferno’ with Paul Newman and ‘Die Hard’ with Bruce Willis but I assure you if you’ve seen them, you’ll do the same. ‘Skyscraper’ is that predictable. I did enjoy the excitement and taking the journey but as almost anyone who has seen a big budget action thriller will say, the script was hardly original.

Instead of a police officer from New York running around inside a building in L.A. trying to stop German bad guys from making a profitable getaway in a giant high rise where his wife is held hostage, we have Scandinavian bad guys doing almost the same thing. However, our hero is Will Sawyer (Johnson), an ex-FBI agent who is also from America but this time the building is in Hong Kong. There are other similarities, but you get the picture. ‘The Towering Inferno’ references are obvious without my having to mention them, I’m sure. Oh, I have to mention that the end of ‘Rocky’ is in there, too, but you’ll catch that without my having to point it out to you.

After tragedy strikes in his past, Will becomes an independent security consultant working from home. He’s delighted to get a chance to work in the largest building in the world ‘The Pearl’ in Hong Kong, through an old friend who gets him the job. His job is to make sure the building is 100% secure and ready to be insured so that the giant residential section can now be opened to the public. This building is immense, beautiful and boasts all the possible amenities a high-tech building could have and all the updates. The units will sell quickly. Its eccentric builder and owner loves his building so much that he lives in the penthouse. Until his task is done, Will, with family in tow, are the only people presently staying in the building until his job is completed.

Neve Campbell plays his wife, Sarah, who’s ex-military. She is both mentally and physically strong. You’ll like her, particularly toward the end of the film where she gets to land a good swift kick to an irritatingly absurd character; but their children are not at all realistic. They are way too calm in the ‘heat of the moment’ so to speak. If I’m a little kid and I’m faced with burning to death or falling to my death, I’m not going to be calmly, statically asking mommy if I was going to die. I’d be screaming bloody murder!! Maybe you don’t want to go too realistic with it but c’mon! A little emotion would have been nice to sell SOME panic in SOMEONE!

Villains take over the building and, wanting something from the owner, set it on fire. They will get what they want this way, right? Seeing the chaos at The Pearl and getting set up as the guy who started it, Will must get in to save his family. Not a challenge for Johnson! Nah. He scurries up a construction crane, a blood pressure raising scene, by the way, and gets himself inside. Every movie he makes is live streamed to the public and is being watched by a crowd who has gathered below. Based on what they see, they’ve deemed him someone innocent of charges being thrown about on the news and worthy of getting through this whole mess he’s in, so they cheer his every successful move; each of which is mostly predictable had it not been for one thing… that duct tape! I’d fill you in more but would prefer you discover what he’s doing with it on your own. It’s better this way. Trust me.

‘Skyscraper’ is Dwayne Johnson in an action flick. Awesome! The poster is good and the trailer is good so, we’re all going to go see it. No matter what you hear, despite your best judgment, Rotten Tomatoes rating aside, you’re gonna go see it because… why not? It has everything an action film needs. Great CG and visual effect, strong characters that you want to see do well, provocative, albeit somewhat weak, story (despite its glaring references to other pictures) and most importantly, the suspension of disbelief. You’ll lose yourself in the film for a little while and isn’t that the whole reason to go see a movie like this? It’s nothing new but you’ll have fun. Go so seeing this one on the big screen this weekend. It’s the way to go with this type of movie.