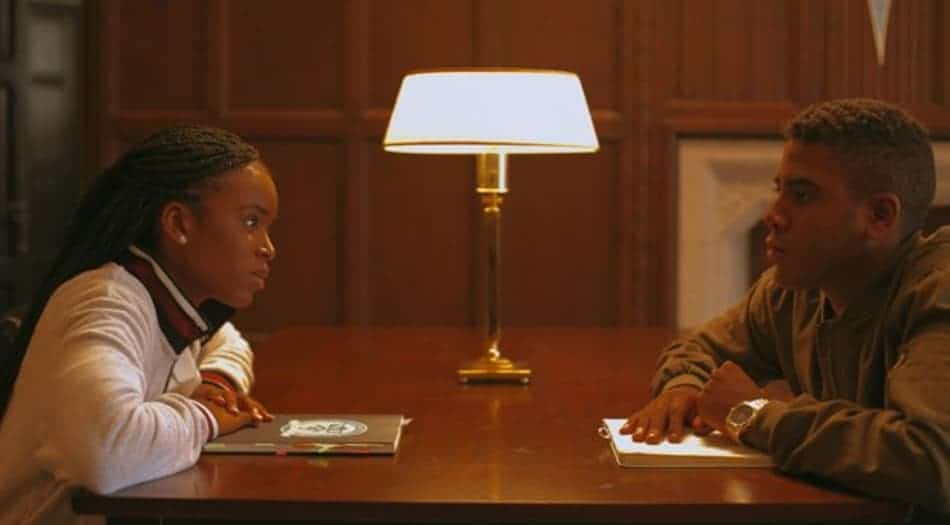 The film ‘Selah and the Spades’ starts by telling its audience about the five’ factions,’ once known as cliques, within the walls of a boarding school named Haldwell High. Students from the prep school run gambling on campus and even see to it that you can cheat. These factions will do just about anything for power and cash, it seems.
​

Their names are, The Spades, The Sea, The Skins, The Prefects and The Bobby’s. Actor Lovie Simone of ‘All Rise’ and ‘Share’ plays Selah Summers. Since her group outshines the others, Selah holds more influence than the leaders of the other groups in the school. She does this with her bestie, Maxxie (Jharrel Jerome), always by her side.

The biggest reason Selah sees herself as queen bee is that she issues the booze, illegal pills, powders, and other fun items that are highly sought after. She also runs the school’s Spirit Squad. In a sincere voice-over, she explains that when you’re a young female, almost everyone wants to control you. Her Spirit Squad is a cheerleading team created to refuse to let that happen. They have the ultimate say over their routines, their cheerleading uniforms, and, most notably, their bodies.

Her most prominent opponent is Bobby (Ana Mulvoy Ten), who runs the aptly named, Bobby’s. Selah is the most powerful, but she has never been able to convince Bobby of this. It’s Selah’s last year in school, and she’s looking for someone to pass her position to, a job Bobby is more than willing to accept, but not a post that Selah would ever offer to her. As they’ve always been quietly battling for top spot, the hatred that the two women feel for one another is palpable. The tension is evident even though Bobby thinks her rival believes her sweet act. One thing they do agree on, however, is that no one can get away with being a ‘rat!’ A rat in the works can bring the entire underground operation down.

Enter new student, Paloma (Celeste O’Connor), who Selah takes on as a protégée of sorts. Not knowing of anyone good enough, she starts thinking that Paloma could be who she leaves the Spades to when she graduates. That said, she begins filling her in on everyone, and everything there is to know about Haldwell High. Selah starts by telling her about the game and getting her acquainted with the players. She shows Paloma the stash and goes over the pricing of the items with her. At one point, she breaks the uncomfortable news to the teen that she’ll have to get her hands dirty for the greater good. This must happen to have and keep power.

Paloma accepts her duties and moves forward on everything with ease, which makes Selah question whether she’s the perfect fit or not. Most especially since Selah can’t stand the idea of not being there to run things as always, she sees herself as the only one capable of perfection. It isn’t long before she loses Maxxie, and he tells her to her face that she, ‘Can’t stand the idea that somebody might be better than you.’ Being the strong woman she is, she leaves him, not accepting his take of her person. The last thing she wants to be faced with is her own imperfections.

‘Selah and the Spades’ is writer/director Tayarisha Poe feature debut. The film is smart, bold, and stylish, the actors are treasures, and Poe gave us a new way to view the classic high school tale of drama and friendships. The ending is brilliant. It catches our attention in new and compelling ways. See the film with its impressive soundtrack streaming 4/17/2020.

Selah and the Spades