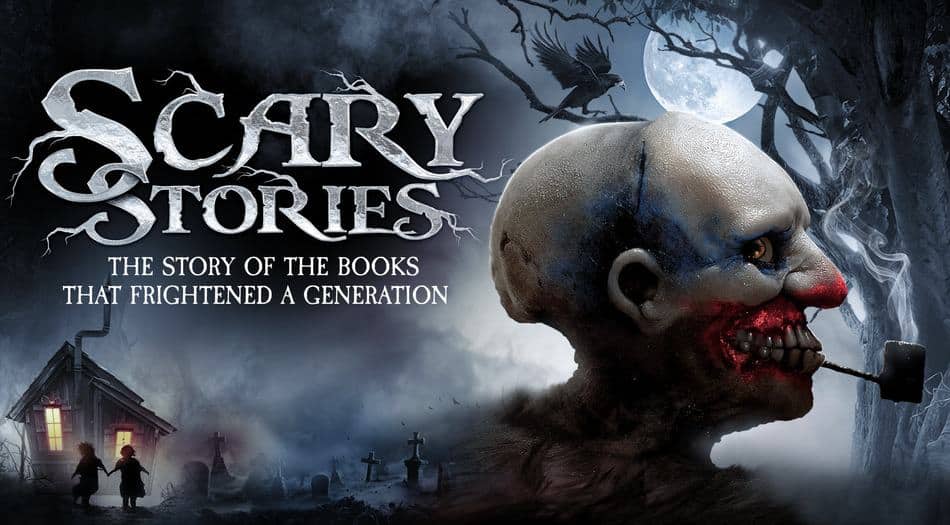 The movie starts by introducing us to a singer who has a song for us called, ‘The Hearse Song.’ His version of it, that is. Once it’s heard you won’t be able to unhear it for the rest of the day. Some of the unforgettable lyrics are, ‘Did you ever think as a hearse goes by, that you may be the next to die? And your eyes fall out, and your teeth decay… and that is the end of a perfect day.’
The voice singing the song is eerily perfect and it stays with you, something first-time director Cody Meirick must have had in mind when choosing it and the rest of the haunting music that is played throughout the film. It goes hand in hand with this documentary that not only celebrates every facet of great art, but brings up the subject of censorship and explains how desperately unjust it is. ‘Scary Stories to Tell in the Dark,’ the work of author Alvin Schwartz who wrote the bestselling three-book series, helped to captivate and broaden young inquisitive minds for a generation.

That generation are adults now. These adults want to tell the previous generation how wrong they were for banning the books that moved them to become the creative people they are today. As studying books of legend and folklore did for Alvin Schwartz, his books stayed with them and they revisited them later in life. They use them to make their own works of genius. Schwartz’ genius, as R.L. Stein, the writer of the very successful ‘Goosebumps’ book series saw it, was not only in how much research Schwartz put into his books but in how he made everything relatable and easily readable for kids. As most people who were interviewed for the doc point out, it’s also in his choice for illustrator. That person is the very private man named Stephen Gammell. His pictures are a large part of the documentary. The books relied heavily on them to grab the attention of the reader and hold onto it tightly. As it was read, the images would be referred to again as the youthful psyche of said reader ran wild glancing at them. This is shown today in the tattoos fans have all over their bodies, the photographers recreating the sketches using real people and the sculptors molding and carving three-dimensional representatives of their favorite characters, attempting to bring them to life. It’s extraordinary work.
There isn’t a lot known about Gammell but many people know of him. He started sketching for books when he drew his own illustrations for book reports he turned in as a child. This didn’t impress anyone, oddly. He, unlike Alvin, didn’t research but rather let the written words spark his imagination. Alvin’s son Peter reads from the only interview of Gammell found that Gammell never asked for nor wanted feedback from an author. He believed that once an author handed in a manuscript, the writer shouldn’t be in the picture. Speaking with them could bring about troubles with his interpretations of their stories. You’ll love this section. Those who were interviewed recall how much they were scared by Gammell and, of course, the stories his work accompanied. All these years later and haven’t forgotten a thing about those sketches.

We’re also introduced to Daniel Schwartz, Alvin’s grandson, who tells us how he came to be known as the, ‘Scary Stories guy.’ He then takes us on a stroll to Princeton University’s Firestone Library where his grandfather created his legacy. There are a lot of special moments in this film that fans will hold dear to their hearts… and if you weren’t a fan before, you’ll walk away one after watching. If you don’t think you want to watch it, brush that away. Whenever the topic of banning books comes up, in a free country no less, the topic needs to be paid attention to. Here, every angle is taken into consideration, presented and heard. By the way, Alvin Schwartz loved the attention. That’s all well and good but it shouldn’t ever happen.
There’s a bit of nonsense in the documentary to have to trek through, a fan reading that could have been left out, but for the most part, this is spot on appealing information. Any horror fan will appreciate its affection for Schwartz and his contribution to the genre.
Here’s some news if you didn’t know… look for the film that’s centered around the books to be released soon. It’s due to hit theatres on August 9th, 2019. Having already seen this will make seeing the movie an even better experience.
The film is being directed by André Øvredal (The Autopsy of Jane Doe) and produced by Academy Award winner Guillermo del Toro, a big fan of the series, who also helped with the script.