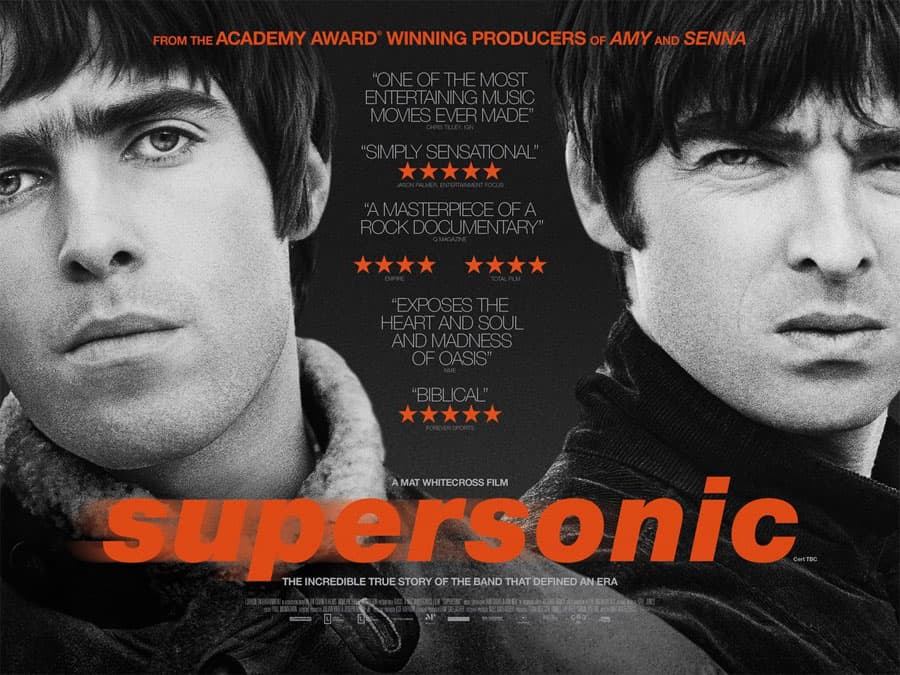 Ever wonder what happened to the British pop group that came up with the smash hit song “Wonderwall” and why it happened?  Wonder no more and take a peek over that wall and into the lives of the band Oasis and the often contentious and belligerent Gallagher brothers, Liam and Noel.  Executive producer Asif Kapadi, director of Academy Award winning “Amy”, the Amy Winehouse biopic, along with director Mat Whitecross, saw a good story in the band that rose too fast and peaked too soon and worked with clips of the band on their rise to the top.

They gathered snippets and collages of interviews and behind the scenes videos and with effective and creative editing came up with an inexplicably engaging documentary you’ll most likely want to watch for the soul reason you might have asked yourself some time ago, ‘What’s their story?’  It’s all here in this documentary “Oasis: Supersonic” that the brothers helped to produce but still couldn’t work together enough to dub their voiceover tracks together.  Well, they’re still Liam and Noel who, perhaps forever, will look back in anger at one another but not regret a thing as their time in the band, good or bad, gave them the best experiences they could have hoped for… which was everything they dreamed of.

The film catches a lot of bitter moments but it also lets you in on how such passionate music came from these two creative souls.  They became who they did because of an abusive father who abandoned them and because sibling rivalry, which was always an issue.  There are five years between them but they seem more like twins, calling themselves “head-cases”.  They have an older brother, Paul, who Noel is a year younger than, that you see a few times but it’s clear these two were close once they started to share a love of music.  Liam, who seems to be the more erratic of the two, wants to thank the person who hit him over the head with a hammer for it was this moment his melodic future was born.  Noel, the songwriter, released his anger toward his father over abuse, stating that he, ‘beat the talent into me.’

The film spans their 1994 debut through the inevitable breakup in 2009 as it shifts from bad moments to good; from members that come and go and the beautiful music that happened in between.  During the journey you see the fans who worshipped them and the people who wanted their money and how both affected them greatly.  The press could be cruel to them for saying what they wanted to, when they wanted to and doing what they wanted to when they wanted to but that was them.  They were rock and roll stars and weren’t going to be controlled… not even by each other.  In the end, the good outweighed the bad and I’d have to say that for this, as well.  In fact, there is no bad.  It’s a fantastic documentary and if you’re a fan of Oasis music, it’s one to add to your movie collection.  This will have you praying they get back together.  The thought that excites me is that they watch this and think that very same thing themselves.  Let’s hope!  They can’t go off into the Champagne Supernova just yet.