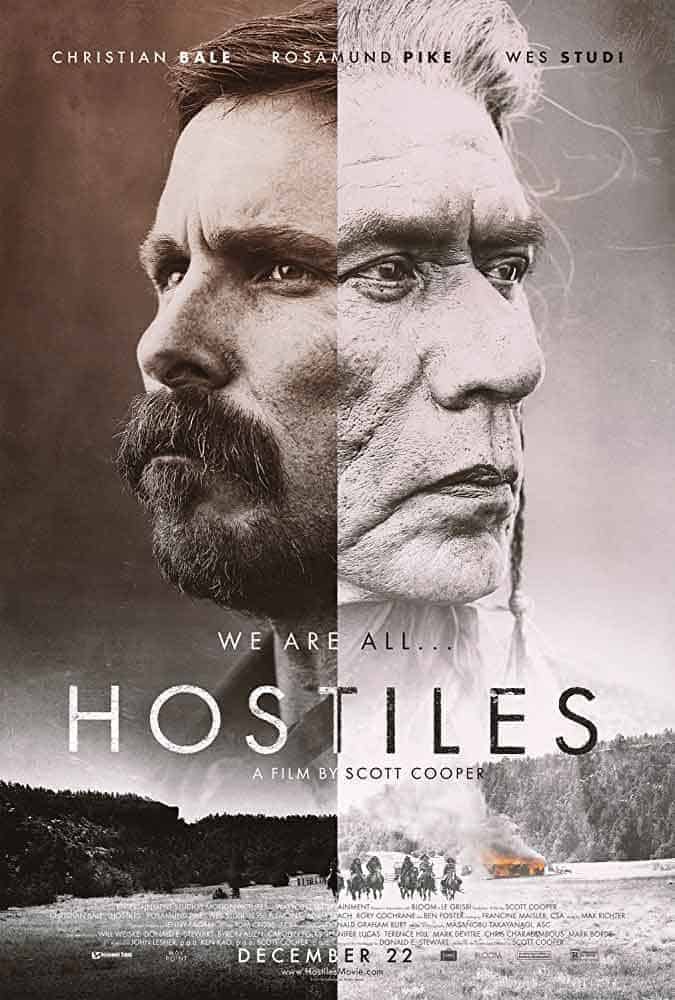 Hostiles is an engaging western narrative about a stiff and reluctant Army Captain and his journey to tribal lands with a war chief he loathes.  Yes, I did say western, something you don’t see very often.  No matter what genre of film you might deem your favorite and which you’d usually steer clear of, I must insist you look at all of the players involved in this project and consider seeing this even if it might go against your grain.  It made my and many other film critics top movies of the year list.   Hostiles stars Christian Bale as emotionally charged Captain Joseph Blocker, who couldn’t be more indignant and hateful if he tried.  The film is set in 1892 at a time when men like Block have been hardened by years of fighting native Americans, taking their lands and destroying their lives.  Block practically regards them as subhuman.

Older now, the job he is assigned to at his post is that of the jailer.  Currently, he’s at a prison in New Mexico where he’s anything but kind to the natives he leaves them in exposed cells to bake in the sun all day.  One of those natives is Chief Yellow Hawk (Studi), who he despises from previous battles.  For the first time in his years with the Army, he gets an order that he’d rather not fulfill.  He is asked to escort chief Yellow Hawk, who has been imprisoned for seven years and is now riddled with cancer, to Montana to die and be laid to rest in his tribal burial site.  The president, in an attempt to right things with the Cheyenne Indians, is asking this of Block yet even this personal request doesn’t help get through to this soldier who is very set in his ways.  He’s against any native, let alone this once great warrior, being allowed to contrive, petition for and obtain such an honor.  With his future benefits on the line, he unenthusiastically gets a team together to be the chaperone for the chief and his family.  The moment they’re out of sight of the compound, he shows them who he really is.  He humiliates Yellow Hawk by putting him in binds and by cutting of the female’s hair.

While on their trek, they come across Rosalie Quaid (Pike), a young mother whose husband and children were recently murdered by some very hostile Comanche warriors.  Usually quite hostile himself, Blocker shows empathy for the woman when he notices she clutches to and tends to a dead infant as though it were still alive.  Bale brings one of his best performances as he shows a strong aura of altruism and expresses goodwill and humanity in slight gestures, revealing how deeply he understands what the woman is going through and how fear, anger and the loss of love got her to where she barely hangs on by a thread.  Earlier in the film, we see what she and her family go through when the Comanche happen upon them.  Though it isn’t overly gory, it is jarring when they’re killed.  Unable to leave her behind, Block has Rosalie join them and a friendship develops.  I must mention that much like the terrain they ride, Pike’s character has so many peaks and valleys that I wouldn’t be surprised to see her end up with an Oscar nomination.  The individual she portrays is challenging and with her performance, she meets every one of her challenges.

At a post they stop at for the night, Blocker picks up an Army Sergeant turned vicious criminal, Charles Wills (Foster), who needs to be transported to Montana to face trial.  Blocker does this believing Wills will be someone he could easily handle since Blocker was above him as they served in battle together.  Surely they will understand one another.  However, when Wills sees that Blocker has grown a little soft, actually speaking to the natives in his charge, he escapes, and the film gets bloody once again.

Through rhetoric that comes from Block and Wills, and as the film progresses, you’ll realize one thing above all else about why this film was made.  It’s a strong reminder that this country has been fighting in a war and for a long time… that war is Racism.  Blocker and Yellow Hawk have a moment of genuine respect and a mutual meeting of the minds and in that scene, you watch the significant message America needs to hear play out.  If westerns of the past didn’t make it clear, this film makes it crystal.  The natives have been horribly mistreated and judged unfairly but it is possible to peacefully coexist and we must if we’re going to find peace in this world.  It’s through peace and understanding that all things are possible.