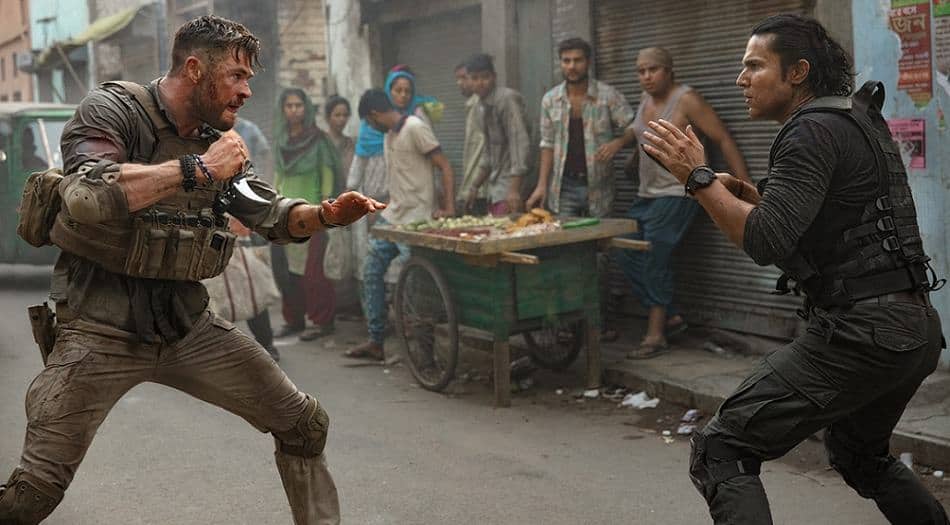 This movie is action, action, action. From beginning to end, it doesn’t stop. If you like your action served with a side of the same, it has knives, guns, explosions, and countless cars being turned over or demolished in one way or another. We even see a helicopter blown out of the air. And, of course, there are fights of every size and variety.

Want an adventure tonight? You cannot go wrong with extra action… or ‘Extraction.’ There’s a simple explanation for all of what you experience in this newest Chris Hemsworth lead thriller. It’s written by Joe Russo, director of the films, ‘Avengers: Endgame,’ ‘Avengers: Infinity War,’ ‘Captain America: Civil War,’ and ‘Captain America: The Winter Soldier.’ And it’s directed by Sam Hargrave who’s known for his stunt work on the very same films. They’re two minds that melted into one to create the perfect marriage. This divine relationship brings you a non-stop cavalcade of drive and forward-momentum.

We open on Tyler (Hemsworth) gunning down some bad guys on a bridge in Mumbai India. Tyler is wounded. We jump to the past to find out exactly how we got to this moment. You can tell by the opening and the next few minutes that you’re perhaps in for something formulaic. I’m not going to lie to you; you are. Ovi, the young son of a wealthy drug lord, is kidnapped by Amir Asif, a rival drug lord. There’s a ten-million-dollar price tag on the child’s head. Tyler, who lost a son, takes the case. His job is to find and free the boy, show proof of life, and then get him to a safe extraction point where he can be taken back home. His team is more than ready for the job but are met with, in essence, an army, ready to stop them from achieving their goal.

One by one and with ease, Tyler takes them out. Amir has enlisted young males to help locate Tyler. Here comes the second wave of troops with their marching orders. Luckily, Tyler runs into an old friend who helps him. Then he gives him a talk to help him see the bigger picture. Amir is never going to stop. Why not have some mercy and save Ovi a painful death. Take him out and collect the millions for yourself. Saju is an employee of Ovi’s father. Even HE is out to collect. Well, sort of. You’ll see.

‘Extraction’ is well produced and directed. I thought it was great. It’s sure to please anyone who likes games and films of this genre. The plot isn’t exactly believable, but it delivers on its promise to thrill and excite you. Amir is brutal and the violence is constant. The only issue I had was with Hemsworth’s accent. It was so thick at times; I had a hard time catching what he said. Luckily, this didn’t happen very often.

‘Extraction’ is out today on Netflix. Have fun!!  www.Netflix.com/Extraction