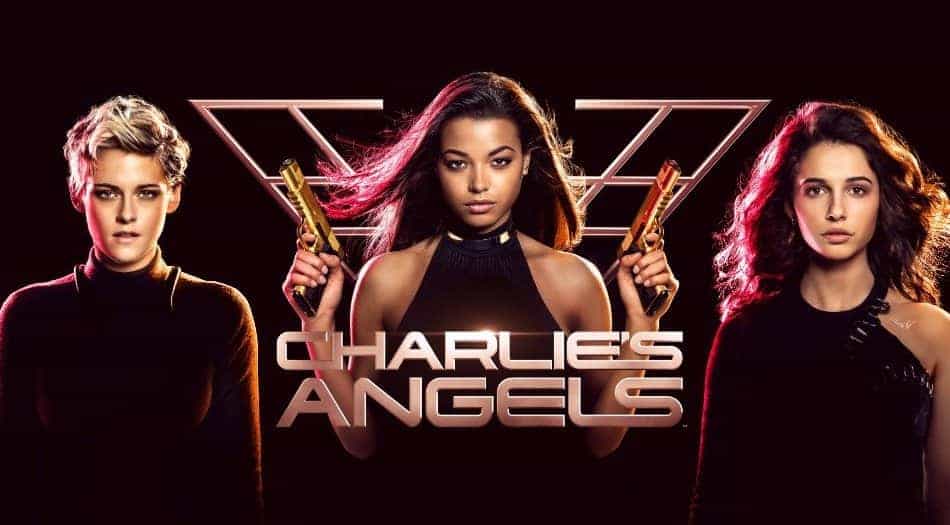 The Townsend Agency has a leader named Charlie, who is never seen, but sometime hear. His network of international groups of “Angels'(female super agents) are led by ‘Bosleys’ (a local group leader – who handles job details). These groups are paid to go around the world to fight injustice. In Rio, there are Angel Sabina Wilson (Kristen Stewart) and Angel Jane Kano (Ella Balinska) working to take down a bad guy. When he is captured, they hand him over to the first Bosley (Patrick Stewart). This Bosley is about to retire and leave the Agency, allowing the second-in-command Bosley (Elizabeth Banks) to take over.

In Hamburg, a woman named Elena Houghlin (Naomi Scott) works for a company run by Alexander Brock (Sam Claflin). She has created a secret device that could be used to cause havoc. She tells her boss Peter Fleming (Nat Faxon) that there is a dangerous super weapon being created. She wants to take the information to Brock and warn him. Fleming shoos Elena off, because he has better things to do. Elena goes to the Agency for help. Here, a different Bosley (Djimon Hounsou) leads Sabina and Jane to get some data from Elena. But things go terribly wrong in a terribly films running battle in the streets of Hamburg. Bosley (that local one) is dead, and Elena is on the run with Jane and Sabina.

Then to various exotic locations they all go, now led by second-in-command Bosley (Banks). The retired Bosley (Stewart) is no longer running things. So when they find that Fleming has stolen the remaining devices, they are off to track him. First it is to Istanbul, then to Berlin and then to London. There is something odd going on, and the bad guy might be someone higher up in an unknown organization. They follow the action to fancy hotels, to the horse racing tracks, to a luxury villa with a bad-ass party going on. Everywhere the Angles go, there is a new fetching outfit to be had…

The movie rushes along with little regard to continuity and little connection to anything in real life. The things that they touch on briefly are glossed over. A doctor in Istanbul who assists poor woman with feminine hygiene products that they need – this is never given a second thought. The fact that Sabina goes to the horse track dressed as a jockey, but there is no discussion of advent of woman jockey in horse racing. Not that there needs to be a dissertation about equality – but a movie that is aimed at girls and women to tell them they can do anything, perhaps just a little mention might be nice?

“Charlie’s Angels” turns out to be mostly a vanity project, based on a long-running idea of woman’s equality that the original TV show never even bought into. On the TV show, for all the scenes on the Angels getting the job done and taking down bad guys – there were just as many where they sat around in their bikinis. This movie wants to be like a James Bond international thriller. But the attitude is more like Johnny English. It is never a real world situation, which is fine – but the world that they wanted to create never comes together.

Elizabeth Banks is all over this movie, as the writer and director. So the flaws of all the cheesy dialog and the bad plot twists are on her. Also, the ‘action’ scenes that look to be edited with a Vegamatic. Those scenes are so choppy and blurred together that you don’t know who is beating up on whom. All the acting is very mediocre. Especially scenes with Patrick Stewart, who sometimes only stands awkwardly in the background. Kristen Stewart play the character Sabina, who becomes very annoying. She even says that about herself in a later scene. There is not much worth remembering in this movie.

“Charlie’s Angels” is not a difficult type of movie to make. To mess it up, well – the devil is in the details.