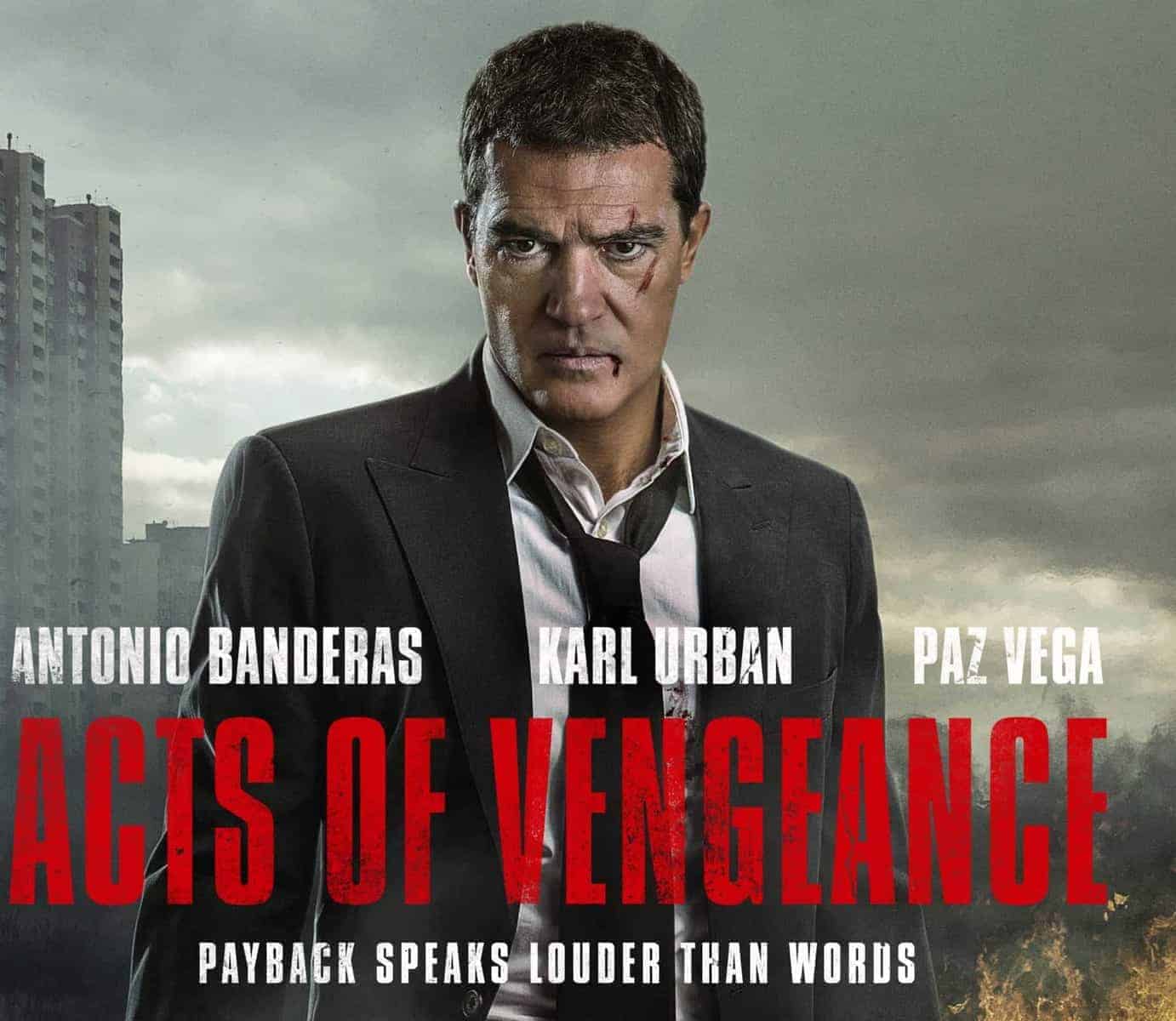 If you don’t mind a little Philosophy with your action movies ‘Acts of Vengeance’ is for you!  The movie is told in parts, each start with quotes such as, ‘Action is the only truth.’ from the Roman Emperor Marcus Aurelius’ writings from the book, Meditations.  Antonio Banderas plays a lawyer named Frank Valera who loves his wife and daughter very much.  He’s at work but on a phone call to his child, he makes a promise to her that he will make it to her performance in a talent show later in that night.  You know what’s going to happen next and so does he.  He is held up at work and knowing his wife and daughter are probably angry, he excuses the fact that they don’t come home right away but as the evening hours tick by, he becomes more concerned.  Around midnight, the police come to his door; his wife and daughter have been found murdered.  Banderas does an adequate job of not holding back the pain that a revelation of this magnitude would bring him.

Frank’s mood darkens and he runs from life.  He eventually decides that defending suspected criminals is not something he is interested in continuing to do so he leaves the law firm.  He stumbles on an MMA ring which gives him the outlet that he needs to work out his frustrations and the loneliness that pursues him on a daily basis.  As time passes, a police officer friend of his, Strode (Urban), informs him that the investigation into their deaths has gone cold.  In an unnecessary voice-over, done in typical Banderas fashion (deeply and quietly), Frank tells us that he realizes he has been punishing himself but now it’s time to find the guilty party… if he has to himself.

Playing detective, he gets himself injured but happens upon a book that gives him some much-needed introspection and he starts to train harder and sharpen his mind to prepare for battle.  He even stops talking so he can better listen to what’s important.  During another confrontation, he’s shot and is helped by an ER nurse named Shelia.  Predictably he leaves her immediately but the men he fought had a German Shepard who has grown attached to Frank and isn’t quite so easy to leave behind.  As it turns out, the pooch ends up being more of an asset than a pest.  Part 3 of the 5-part narrative starts by telling us that ‘There is nothing that hinders you from doing what must be done.’  A relationship develops between him and, oh did I tell you Shelia makes a return?  Yes, Shelia is back, and they begin to bond.  This confuses him because his life is changing for the better but he’s ill-prepared, still wanting only for the past to return.

Upon further investigation, he thinks he knows who the guilty party is.  Not surprisingly, it’s friend Strode.  He follows him and after breaking into his home, he finds the reason Strode would end the life of his innocent wife and child.  They meet and during a melodramatic confession, Strode happily shouts out the reason… possibly in case you didn’t already figure it out yourself or read it in an earlier clip.  In a life and death fight with Strode, Frank’s inner monologue echoes the words of whom he considers the greatest stoic of all which are, ‘The best revenge is to be unlike your enemy.’  Does he learn from the passages he has been reading all this time or does he break with Marcus Aurelius and kill Strode?  You’ll have to find out yourself when you see Acts of Vengeance, out today at AMC Arizona Center and On Demand!