“20th Century Women” is a movie about a middle-aged woman with a teenage son, and the trials and tribulations of living in 1979. They live in Santa Barbara during a time of social change and upheaval. With some close friends, they all try to come to accept the changes in life. While the story meanders quite a bit, it is told with a strong conviction, albeit, from a very feminist perspective.

Divorced mother Dorothea (Annette Bening) is raising a 15 year old son Jamie (Lucas Jade Zumann) while living in a large house where she rents out rooms. Staying with them is Abbie (Greta Gerwig) a young woman who has a free spirit, but a heavy soul. They also rent out to William (Billy Crudup), a man who fixes cars and is working on rebuilding the house. 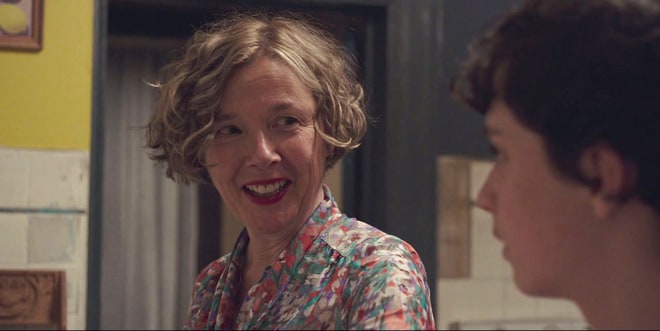 Jamie has a 17 year old best friend named Julie (Elle Fanning), who is estranged from her mother and spends most of her time at Dorothea’s house. Julie has become a bit of a strong-willed child and smokes and has sex with several guys. Julie and Jamie have known each other for so long that she will not do anything with Jamie. Yet almost every night, Julie sneaks out of her house and comes over to talk with Jamie and sleeps next to him. Explain that to me, please…

Dorothea believes that Jamie needs some strong figure in his life to help form him into a man. So she decides to ask Abbie and Julie for help in that area. They are confused, but agree to do so. Abbie thinks that Jamie needs to read a lot of feminist literature to truly understand the woman’s perspective, and that will make him into a sensitive man.

Abbie has suffered a bout against cancer, and is sometimes very troubled. But she hides it well. Dorothea smokes constantly, and picked up the habit when it was in style. She never thinks that someday it might cause her to develop cancer. William is in a house with women, and is attracted to Abbie. But mostly he is a quiet person on the sidelines. Jamie has a deep crush on Julie, and it pains him that she does not want to be more involved with him sexually. But he learns to be more assertive and wants to have a place in Julie’s life. Dorothea thinks that Jamie is drifting away from her and will no longer be there as an emotional support.

And for the most part, the story is just that – several relationships that grow stronger or weaker, and people in the same house that live in an ever-changing tide of emotions. There are events that happen occasionally. But there is nothing in the sense of a story line or plot that develops. There is no steady logical progression of things that happen.

The director’s style throws in many flashbacks, narration of future events and outcomes, and some odd use of speeded-up camera work and strange sequences of color shifting car rides. It all appears to be working too hard to use gimmicks to replace good story-telling and a well constructed plot. Even with the distractions of flashiness over substance, the actors all work hard to give the characters a well-worn lived-in look. They all have conviction to the character, even with the quirky character traits that almost get in the way.

Annette Bening gives a solid performance and seems to give it her all. Greta Gerwig is a fun character to watch, and she tries to overcome the odd things the plot does to her role. Elle Fanning has a tough character to play, yet she makes Julie seem to be a broken-hearted kid who has trouble growing up and being mature. Lucas Jade Zumann is also good, but Billy Crudup has a character that remains a mystery.

If the plot is not the most important thing about a movie, and character traits/development is your cup of tea, then you would have a fine time seeing this. There is a distinct tilt to the female side of things, so you best know that from the onset.

Not every movie theater needs to have fast cars and guns a-blazing.  If you prefer something other than that, you might enjoy “20th Century Women”.